Its 3rd down and 4 whats your call coach?
Post Reply
108 posts

hilltopper wrote: ↑
Wed Aug 14, 2019 11:52 am
If the Bengals put Jake on the practice squad he can be signed by any team willing to put him on the 53 man roster.
If that is the case, my hunch is that he will find himself on someones roster as these NFL teams are all scrutinizing what is going on with other team's training camps. After all, we are talking about a QB, and picking up a 6' 6" 240 lb QB with a big arm has a low risk/tremendous upside.

Agreed. Granted the Bengals didn't spend a draft pick on him, but putting him on the practce squad makes him available as a "free agent" to any team.

To make the cincinnati roster, the most likely scenario is the kepp Dalton (starter), Finely (Drafted backup), and Dolegala (UDFA #3). Not sure Driskel has as much risk out on the open market, but I could be wrong.

Even if Jake is stashed on the Bengals practice squad, I think there is a good chance he gets signed and put on a roster somehwere else in the league at some point in the season.

He is on the roster and in the depth chart... when do they do final roster cut downs?
“You can be as talented as you want, but if you don’t play together and as a team, you’re not going to win.” -Donyell Marshall 1-21-2019
Top

He is currently on the roster, but NFL teams start with 90 players in the preseason. They haven't made all the cuts to get down to 53-man roster. Se


The Bengals begin preseason play this week when they take on the Chiefs in Kansas City.

This is typically the busiest month of the year, as NFL teams are not only preparing themselves for the grind of a 16-game regular season, but they’re also slowly trimming their rosters down from 90 players to 53.

Here are the biggest remaining dates to know before the Bengals’ 2019 season kicks off in Seattle:

Aug. 6: Deadline for players under contract to report to their clubs to earn an accrued season for free agency. If a drafted rookie has not signed with his club by this date, he cannot be traded to any other club in 2019 and may sign a player contract only with the drafting club until the day of the Draft in the 2020 League Year.

Aug. 10: Bengals at Chiefs in Week 1 of the preseason.

Aug. 15: Bengals at Washington in Week 2 of the preseason.

Aug 22: Bengals vs. Giants in Week 3 of the preseason.

Aug. 31: Prior to 4:00 p.m. EST, clubs must reduce rosters to a maximum of 53 players on the Active/Inactive List. Simultaneously with the cut-down to 53, clubs that have players in the categories of Active/Physically Unable to Perform or Active/Non-Football Injury or Illness must select one of the following options: place player on Reserve/Physically Unable to Perform or Reserve/Non-Football Injury or Illness, whichever is applicable; request waivers; terminate contract; trade contract; or continue to count the player on the Active List.

Sept. 1: Claiming period for players placed on waivers at the final roster reduction will expire at 12:00 noon, New York time. Upon receipt of the Personnel Notice at approximately 1:00 p.m. EST, clubs may establish a Practice Squad of 10 players (clubs participating in the International Player Development Program may sign one additional international player to a Practice Player Contract.) No club, including the player’s prior club, will be permitted to sign a player to a Practice Player Contract until all clubs have received simultaneous notification via the above Personnel Notice that such player’s prior NFL player contract has been terminated via the waiver system.

Sept. 9: Bengals vs. Seahawks in Week 1 of the regular season.

You’ll notice that there is only one cutdown deadline now. Previously, there was a deadline in which teams were required to cut their rosters to 75 players before the fourth week of the preseason.

Typically, teams will slowly trim the roster throughout the next four weeks, though the majority of cuts won’t be made until the final two weeks of preseason action. Rumor has it that Jake will be playing in the second half of tonight’s Cinci/NYG game.
Top

There he is!
Top

Great game for Jake. The Bengals are going to have to make a tough decision at the end of camp. As I posted earlier, I think Jake's best shot to make the team is a the 3rd QB behind Dalton and Finley. If they put him on the practice squad, I'm quite confident he gets picked up by another team.


We won’t see the Bengals No. 1 offense for 16 more days, until quarterback Andy Dalton stomps his foot to get the silent count going in the din of Seattle. But if you’ve been listening closely, they’ve bought into what new head coach Zac Taylor is selling in that offensive playbook that yielded three passer ratings ranging from 92.7 (rookie Ryan Finley) to 138.9 (rookie Jake Dolegala’s debut) in Thursday night’s 25-23 pre-season loss to the Giants at Paul Brown Stadium.

The operative term is “a quarterback-friendly offense,” so maybe it’s no coincidence that the Bengals have three coaches that played the position at a high level in college. (Taylor holds Nebraska season records, quarterbacks coach Alex Van Pelt passed Dan Marino as Pitt’s all-time passing leader, offensive coordinator Brian Callahan played at UCLA) and have been coaching NFL quarterbacks for a combined 17 seasons.

Dolegala probably said it best. Here’s a rookie from tiny Central Connecticut State who took 18 snaps Thursday, easily more than he’s had in all of training camp combined. And yet he went 10 of 12 for 94 yards and two TDs with the scoring catches going to a vet on a fade to the right to Josh Malone and another fade going to the left to undrafted rookie Damion Willis.

“It’s a quarterback-friendly offense,” Dolegala said. “We like to start by running the ball and if we get that going, it makes it very easy for us quarterbacks to play-action. All of our drop-back stuff is really simple reads. I don’t to say it’s a simple offense because it’s not. Zac gives us the best opportunity to perform at a high level.”

He looked really good! He showed a strong arm and was accurate with his passes. On one play the announcers raved over the accuracy.
I think his stock went up after that performance.
Top 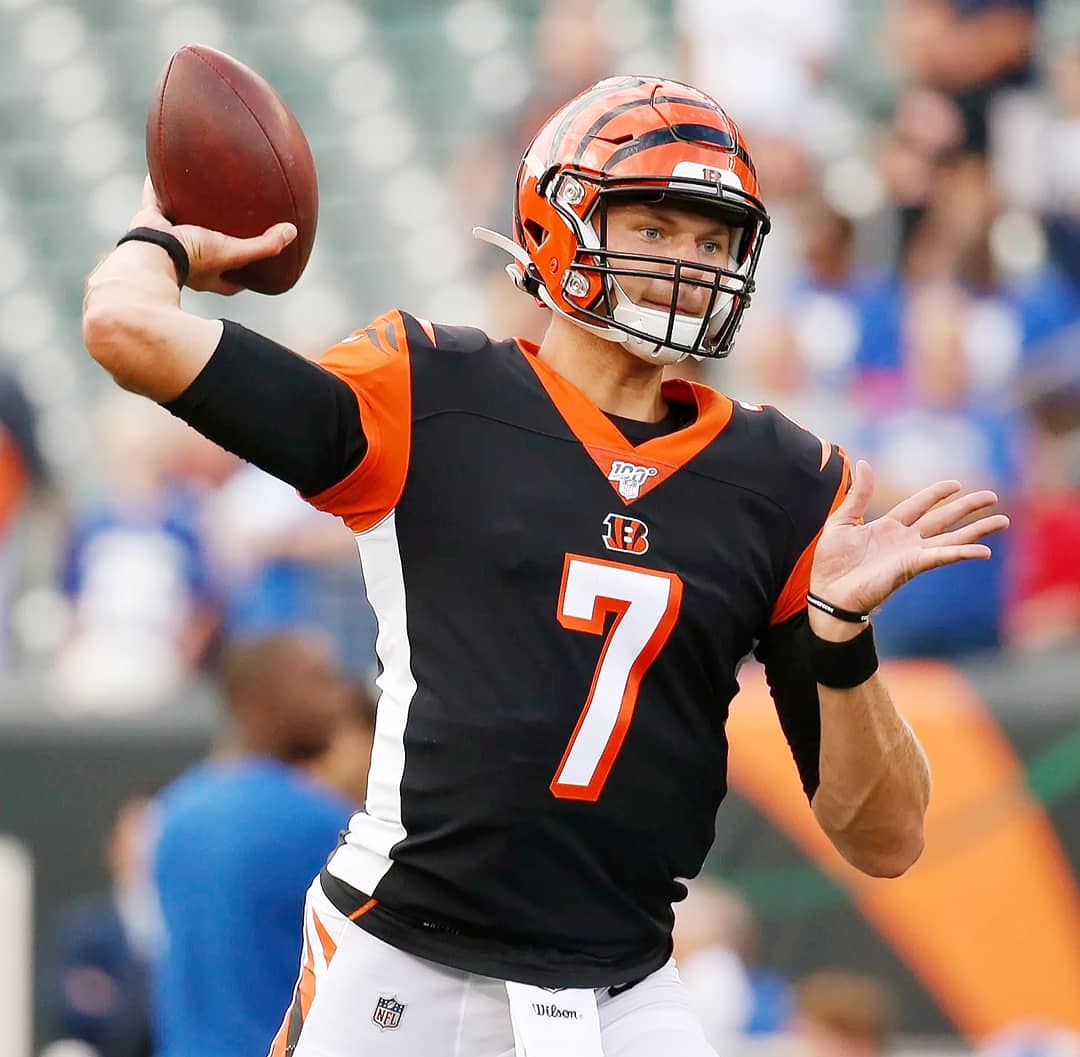 Tough choices for the Bengals after the final exhibition vs. the Colts.

Geoff; What's the odds of Dolegala making the team? I'm so impressed with this kid. I know he has not had the reps that the other three QB's have gotten and to see him play the way he has just blows my mind. I want to see more of this kid! Keith Jones, Tipp City, OH

KEITH: Let’s see what he does in Thursday’s pre-season finale. Yes, I agree. Would love to see more. Despite a lack of practice snaps, anytime undrafted rookie quarterback Jake Dolegala practices or plays, he shines with a big arm and a physical presence in the pocket.

In the Green-Dalton era, they’ve traditionally kept just two quarterbacks. With unlucky Jeff Driskel fighting a hamstring, it looks like he’s unable to show his versatility at other spots. It would figure they’d send Dolegala to the practice squad to get seasoning with Andy Dalton and Ryan Finley as the two active guys.

But let me ask you this. If Dolegala unleashes that big arm again when he plays the second half against the Colts, would he go through waivers unclaimed? We’re not talking about a backup safety or undrafted guard, here. It’s the most important position in the league and there aren’t 32 of them.